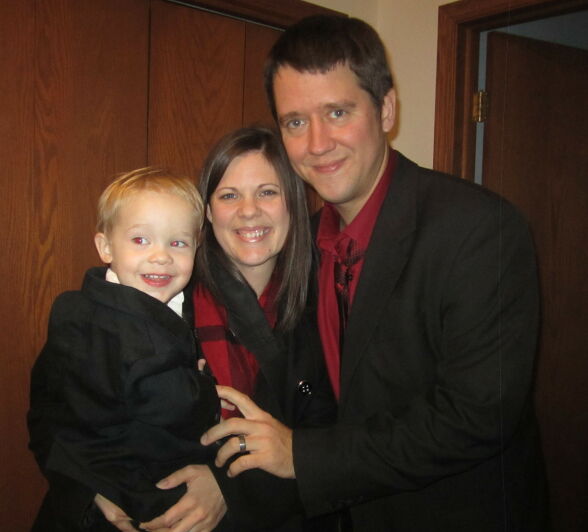 My education through Wichita State University has finally come to an end. I graduated with my Master’s of Art in Teaching-Early Childhood Unified a few weeks ago. Although it was not easy at times I am very happy that I decided to further my education, now if I can just find a suitable job in the fall.  I will continue to work as an instructional para educator in the special education preschool through this spring semester.

Back in March Aaron and I bought a house in Medicine Lodge. I decided that I did not want to spend another fall semester living in Wichita without Aaron; while he worked on the farm in Sharon. So in May we moved to our home and have tried to unpack ever since. We painted almost every room upstairs and Aaron made  our living room into a nice media room. Our house has four bedrooms and three bathrooms. I like the space in the kitchen and that we have main floor laundry. It just feels nice having a home that is our own. The transition from Wichita to Medicine Lodge has been fairly easy for me. I think Nolan has had a much harder time of it.

Since August we have had three different childcare providers for Nolan. He is a great kid but sometime it is just hard to endure that much inconsistency. As a mother I am really struggling with family vs career right now. I want us to be able to have a consistent loving caregiver for him; and then sometimes, like as I am writing this I just think how can I expect anyone to love him or care for him like I do. I know many working mothers feel the same way. It is such a difficult decision. I don’t want to feel like my newly attained degree was for nothing. Does it matter if I use it right away? I know that I will never get the time back with Nolan, it is just hard to decide what is right for our family and financially.

I think that Aaron and I are good parents and it is still incredibly hard. Aaron and I have a parenting WIN we want to share. We have struggled with when and how to get rid of Nolan’s pacifier for a while. I told myself that I was going to wait until after I graduated as I anticipated an awful separation and wanted to have the energy to put up with it.  A tip from a friend turned out to be amazing. My friend said that they just cut the tip of the pacifier and their child simply was no longer interested.  I was skeptical to say the least.

Our son was older (28 months) and very attached to the pacifier than our friend’s child. But I tried it, snipping the tip of the pacifier so that it was not noticeable when looking at the pacifier. We had previously reduced the use of the pacifier to only at nap time and bedtime. As we headed down for nap I handed the newly snipped pacifier to my son and he popped it in his mouth. He took it out and put it back in and said to me “mama it is squeaky, wash it off”. I said alright and complied with the request. He tried it again and then again said it was squeaky. I said “well I don’t know why it is squeaky , you can drink your milk and close your eyes.” Otherwise following our normal nap time routine. I allowed Nolan to continue holding the pacifier, but eventually he just gave it to me and said “you hold it”. We are now on day three and he still asks for the pacifier but he tries it then hands it back to me immediately. I feel like this was nearly effortless, I cannot believe we didn’t do it earlier. This going so smoothly has been a nice Christmas break surprise.

This year for the holidays we managed to spend time with both families. We are so lucky to have families that get together and celebrate with food and gifts. We spent the Poe family Christmas in Wichita at Dave’s and Chris’s house. The guys and Holly went to the KSU vs Gonzaga basketball game, thanks to Straub International for supplying some complementary tickets after Aaron participated in a Facebook contest. They enjoyed the game and then we all had Christmas dinner and unwrapped gifts. The Poe family just keeps growing. This year two new cousins were added. Madilyn Poe was born on March 5 to Dave and Chris while Evan Poe was born on September 23 to Craig and Lindsay. It is fun to watch Nolan interact with all of his cousins. Julianna (9) and Gabriella (6) certainly are his favorite Poe cousins, as he can chase them around. They are great at keeping him busy for hours.

The Traffas family celebrated in Sharon on Christmas day this year. The gathering was quite enjoyable, as always Marilyn made tasty food and the gifts were exchanged. As children often do Nolan ended up with far too many gifts this year. Some of his favorites include a semi truck that hauls a loader and roller, a work bench with a “real” drill, and a blue New Holland loader tractor that Grandpa Brian had bought for Nolan at an auction when he was about 6 months old.

I had a list so long when this break started of all the things I wanted to accomplish over break. I am not necessarily proud to say I have not yet made a quilt, made couch pillows, read any books or organized by bedroom. However I have enjoyed some much needed time with my little guy and even some quality time with my big guy. My house is cleaner now than when break started and my laundry and dishes are done and put away. So that is something.

I always try to give an update on Nolan,I could list so many amazing things that Nolan has done lately but there are just too many so here are some recent highlights:

1. Wrote and preformed his first song, we are calling it I can’t fix it

2. Put his boots on all by himself, after I told him you can’t go outside you don’t have shoes on.

3. Rolled over to me in the morning and said “Mama, I love you so much!” and gave me a kiss

4. He is not shy about his wants or needs, often telling me I need ice cream or I don’t want to take a bath!

5. He has started to recognize some letters of the alphabet and a few weeks ago sang the alphabet song. This is quite interesting to me as I don’t sing this with him, but someone was and it stuck with him.

6. People who spend a little bit of time with Nolan often describe him a  all boy, he love trucks and tools. Often he makes car noises and is always using something as a tool the fix things.

7. Nolan loves his Daddy, Aaron tries very hard to let Nolan work with him which is a real challenge for Aaron. Recently Aaron said “you know it is great that Nolan can talk now, but is he ever going to shut up!?” I calmly replied “No” 🙂

9.He properly uses the word ridiculous, I often do not agree with what he thinks is ridiculous like when I added the lego window to the train car and he smashed it down and said “mama that is RIDICULOUS!”

10. He loves playing outside, especially at grandma Marilyn’s house.

11. He is sweet and kind, when he heard a baby crying in church he said, “someone is sad, I want to cheer him up with this book”. Of course being all boy he also hits, kick, throws and stomps on things. I love that little guy!